"'Believe,' said the rumbling voice [of the buffalo man]. 'If you are to survive, you must believe.'

"'Believe what?' asked Shadow. 'What should I believe?'

"He stared at Shadow, the buffalo man, and he drew himself up huge, and his eyes filled with fire. He opened his spit- flecked buffalo mouth and it was red inside with the flames that burned inside him, under the earth.

"'Everything,' roared the buffalo man." 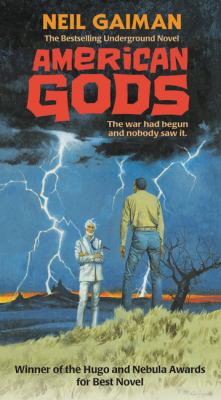 American Gods: the Tenth Anniversary Edition by Neil Gaiman
Call Number: 813.54 G35 2016 (Youngstown Campus)
ISBN: 9780062472106
Pages: 750
Shadow Moon starts American Gods feeling hopeful.  Soon he will be released from prison, be reunited with his beloved wife Laura, and have a job waiting for him at his best friend's gym.  But storm clouds and crows are gathering and suddenly all hope evaporates when Shadow, though released early, learns that his wife Laura and his friend died in a car crash.  As he is making his way back home for the funeral, Shadow encounters the mysterious Mr. Wednesday.  This odd man, Wednesday, immediately offers Shadow a job, being his Man Friday: guard, gofer, assistant.  Thinking Wednesday is crazy, Shadow initially rejects him.  Catching up with Shadow at a dive called the Crocodile Bar, Wednesday finally talks Shadow into joining him, sealing the deal with mead.  Wednesday also enlightens him to some truths of the world, including the existence of a war between the Old Gods (led by Wednesday/Odin) and the New Gods (led by Mr. World).  The Old Gods are those spirits made alive through the belief and worship of indigenous peoples, colonizers, enslaved, and immigrant alike, but, when reaching our shores, America changes and disempowers them from their original potent forms.  The New Gods, though, are those that America has recently invented through paying attention to (read: worshipping) the new and shiny Media, Globalization, Technology who have recently been depriving the Old Gods of worshipers.  Both sides desperately want Shadow to be on their side, sometimes using physical coercion and sometimes temptation.  Shadow has to decide where his loyalties lie.  Meanwhile, in sleepy Laketown, another mystery starts plaguing Shadow who uses the town as a place to lie low waiting for Wednesday's call.
The characters in the book are very complex. Shadow is an interesting protagonist, as he doesn't know he's the center of the storm.  Beginning the novel as a convict, also makes Shadow a bit of an antihero, that you, the reader, have to actively undo a lot of your own prejudices against to see him as the honorable hero that he truly is.  Many of the Old Gods are colorful especially Czernobog and Mr. Nancy (Anansi the Spider).  You feel the calm peace of Ibis and Jacquel (Toth and Anubis).  Wednesday is shockingly bold and charming, yet has a sinister edge to him.  The New Gods are equally colorful, yet there is a vapidness to them due to their newness.  Unfortunately many of the human characters suffer in comparison to these flamboyant and larger-than-life deities.
Gaiman writes with such delicious prose that you feel him almost seducing you with his words.  And his action never stops.  There are several twists and turns throughout this book.  With all of the interweaving narratives and plots and schemes both in the main narrative of Old Gods v. New and in the "side" narrative in Laketown, you have to pay attention because you feel like you're being asked to follow the pea under the cup.  A seemingly unimportant detail or a throwaway comment may become important later.
This book has earned the status of being a masterpiece and it is one.  I must admit though, there is one section at the very beginning of the book that may turn off those of more delicate sensibilities.  If you can get past that scene you are in for a delightful ride filled with complex characters, an amazing plot, and some truly great commentaries on America, Americana, and family.
Add a Comment